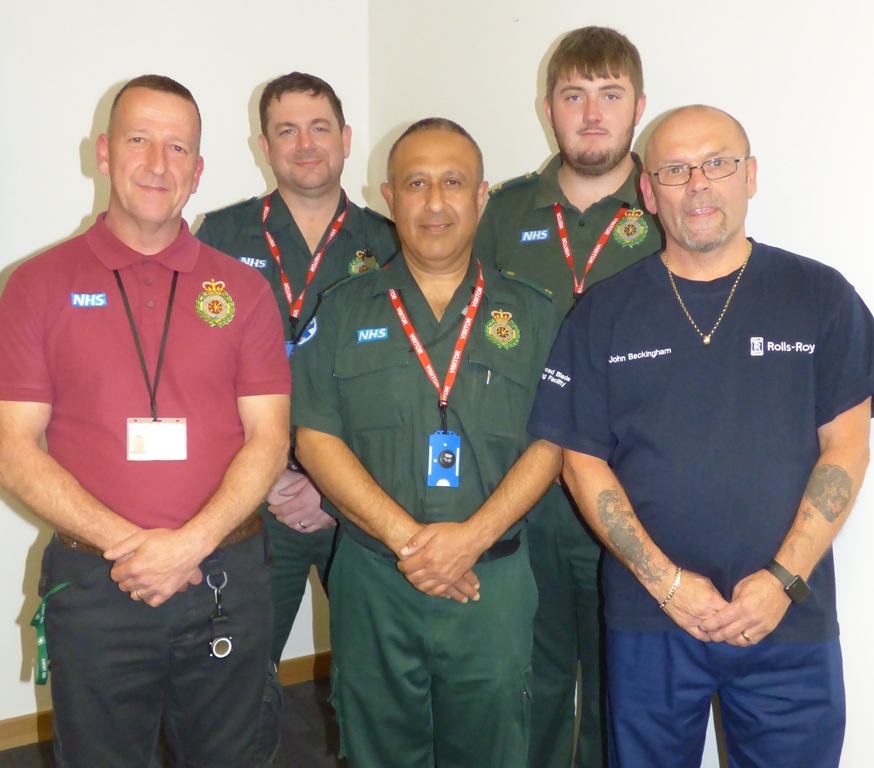 Ambulance Community First Responder (CFR) John Ibbotson has been hailed a hero after his quick-thinking actions saved a colleague’s life.

Father-of-three John Beckingham was doing an early shift at Rolls-Royce in Rotherham in February 2019 when he started to feel ill.

Mr Ibbotson was alerted and, using the skills he has gained during his almost five years as a CFR with Yorkshire Ambulance Service, soon suspected that he was having a heart attack.

“He was mumbling, his radial pulse was weak and his carotid pulse in his neck was irregular; I knew it was serious,” recalled Mr Ibbotson, who lives in Deepcar, Sheffield. “Then I noticed a blue tinge in his lips and he started sweating profusely so I asked a colleague to call for an ambulance. I kept him comfortable and made sure his airway was clear and we had the work defibrillator on standby in case we needed it.”

The ambulance crew – Ian Nettleship, Javed Chaudhary and Alex Robson – arrived and confirmed he was having a heart attack, treated him on scene and stabilised his condition before blue-lighting him to Northern General Hospital. He was immediately taken for surgery and had two stents fitted.

Mr Beckingham, who is making a good recovery, said: “I’m just so thankful that John was there when it all happened; if he hadn’t been, the outcome could have been very different. His quick response and knowledge about what to do and when to do it definitely saved my life.

“I owe everything to John, the ambulance crew and hospital staff – they are all heroes and I can’t thank them enough.

“I would also like to thank Rolls-Royce for their continued support while on my phased return to work, especially Valerie Jackson and Gary Lynch, cardio rehab for all their help and mostly my wife Sandra for being my rock.”

Mr Ibbotson said: “I’m just so thankful that my CFR training meant I was able to spot the signs and recognise that he needed professional help quickly. John popped into work a few weeks after it happened and it was great to see him looking so well.”

Mr Beckingham and his wife Sandra were given the opportunity to formally thank Mr Ibbotson and the ambulance crew for their life-saving efforts when they were reunited at Rolls-Royce in Rotherham on Tuesday 21 May.

The event was attended by Yorkshire Ambulance Service Chairman Kath Lavery who said the incident was a perfect example of how CFRs and staff work seamlessly for the benefit of patients.

Rolls-Royce Rotherham have since made a £300 donation to the Yorkshire Ambulance Service Charity in recognition of the life-saving work of the service and the efforts of Mr Ibbotson and the YAS team who treated Mr Beckingham on the day.