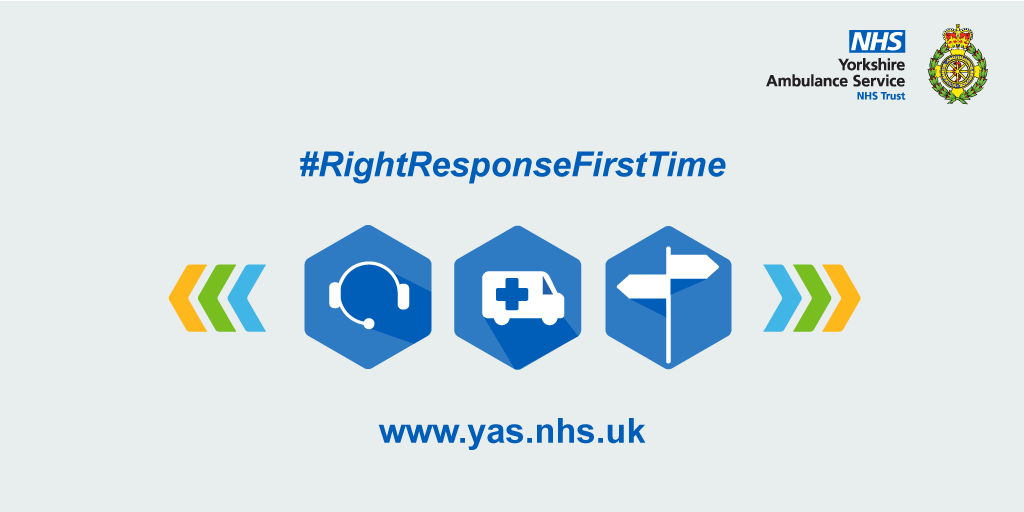 We have launched our Right Response First Time campaign to highlight the different ways in which we respond to 999 calls.

We will always dispatch an ambulance to patients who need time-critical help in a serious or life-threatening emergency – here are some examples: 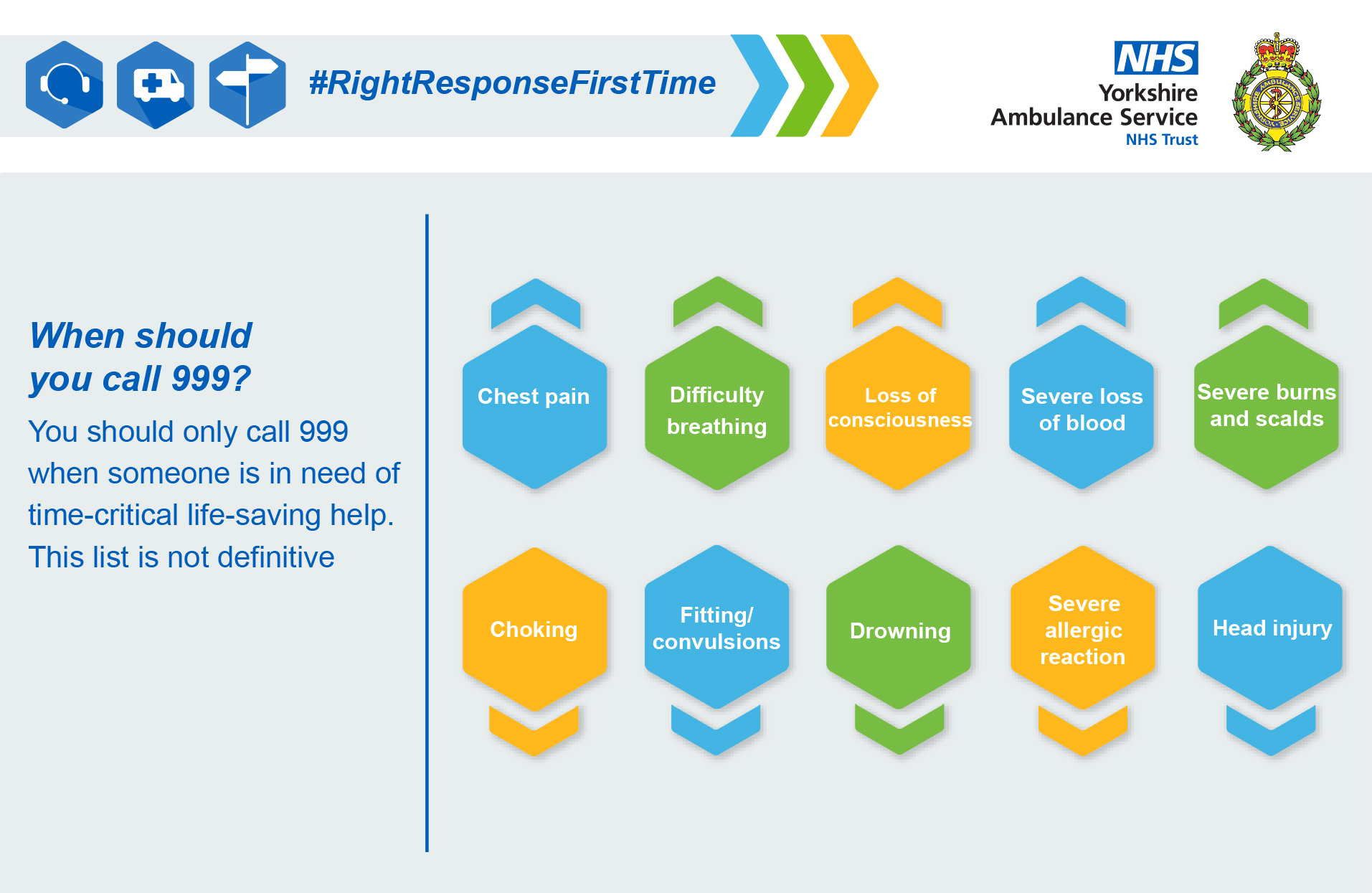 However, we know that hospital isn’t always the most appropriate destination for patients who need less urgent help.

In 2017, only 67% of our patients who called 999 required hospital admission. When it is safe and appropriate to do so, our less serious calls can be dealt with at the scene (see, treat and refer) or over the phone (hear and treat) by our team of experts.

When you call 999 you will be put through to one of our Emergency Medical Dispatchers who will ask a series of questions to help identify the severity of the patient’s condition. The incident will be prioritised and the most appropriate response provided.

New national standards were introduced by NHS England in November 2017 following the largest clinical ambulance trial in the world which Yorkshire Ambulance Service participated in. Calls now fit into the following categories which determine the speed and type of our response: 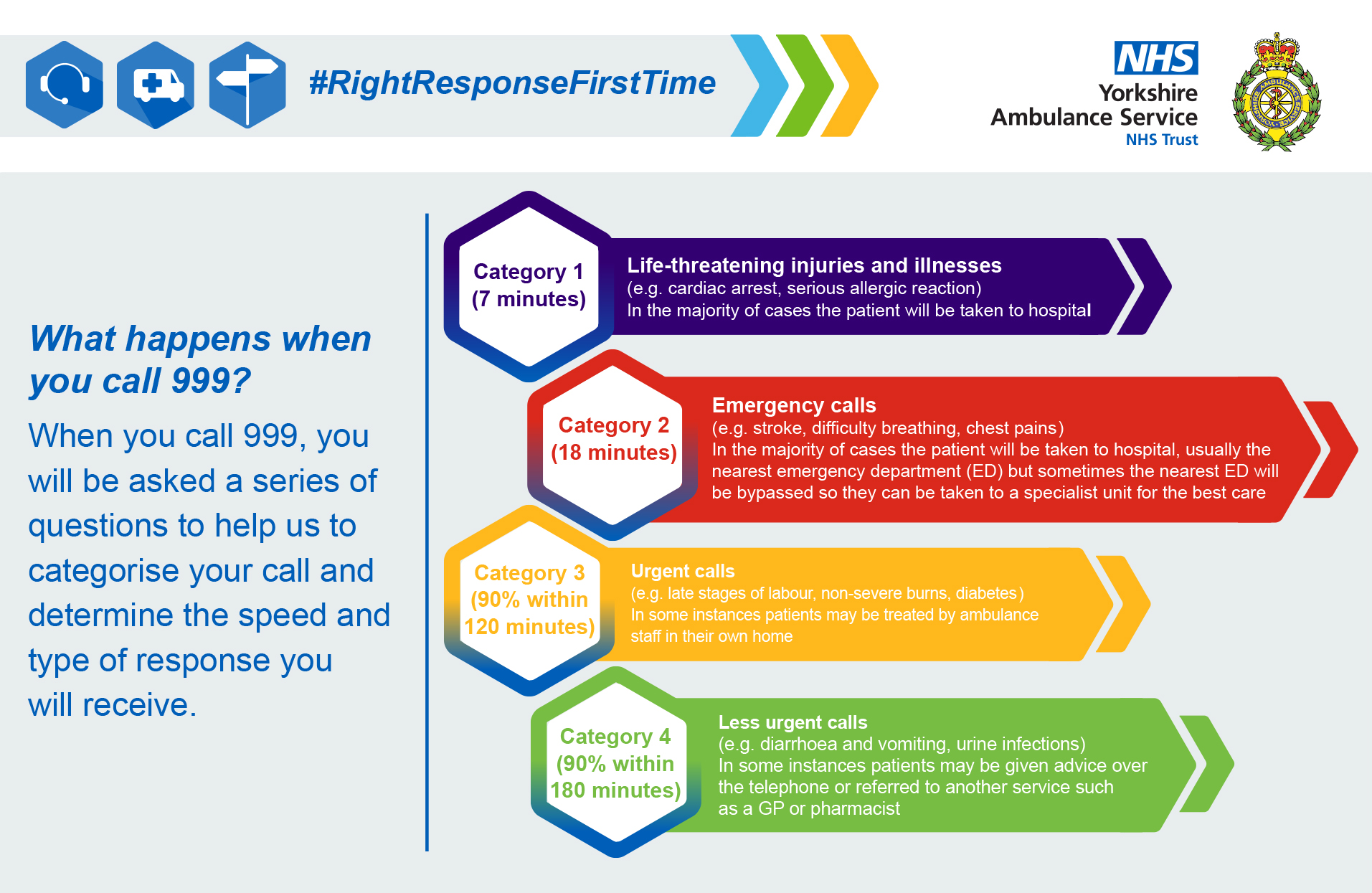 Under the new system, call handlers in our 999 Emergency Operations Centres ask additional questions that can very quickly identify those patients who will be the highest priority; this allows an ambulance to be dispatched without delay. For other types of call, ambulance staff are given additional time to assess the needs of the patient more fully so that the right response can be sent first time. This has resulted in a more efficient tasking of ambulance resources.

It is well documented that the number of people attending emergency departments and calling 999 for an ambulance is growing each year. Choosing the right service best suited to your illness or injury relieves this pressure.

Please remember that if it is not a life-threatening emergency and the patient does not need immediate medical attention, there are other NHS options available: 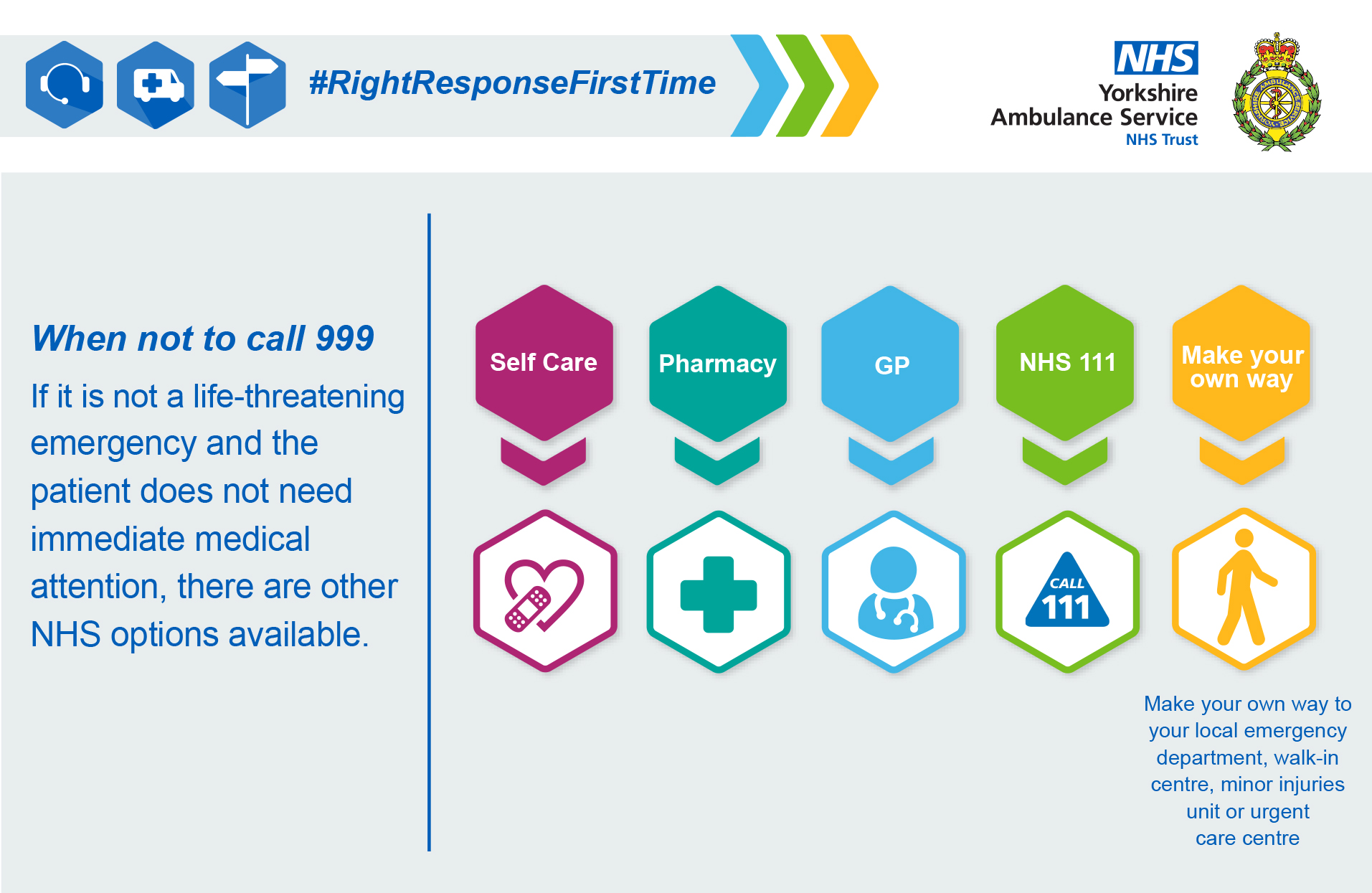 Share the campaign on social media using #RightResponseFirstTime and these resources:

Here are some patient case studies which provide an insight into the complex variety of responses we provide to those who call 999 for our help. Please feel free to use these to illustrate the campaign.

A 54-year-old woman collapsed while having lunch with her husband at a pub in the Yorkshire Dales. She was unconscious and not breathing.

A member of staff at the pub called 999 and, as with all calls, the first question they were asked was ‘Is the patient breathing?’. When they replied ‘No’, the call was treated as a potential cardiac arrest – the ultimate medical emergency – and coded Category 1 with a target response time of seven minutes.

Our Emergency Medical Dispatcher identified that a defibrillator was located in a cabinet near to the pub and a code was given so the device could be accessed. Cardiopulmonary resuscitation (CPR) instructions were also given.

Ambulance clinicians were on scene within five minutes and following a quick initial assessment they took over CPR and provided advanced life support.

The patient’s heart had started beating again and by the time they had arrived at hospital, she was beginning to show signs of making an effort to breathe on her own. The patient regained consciousness after a few days and has made a good recovery.

Staff at city centre restaurant in Hull called 999 for a man collapsed by their doorway. His breathing was heavy and noisy.

The call was categorised as high-priority Category 1 and an ambulance and rapid response vehicle (RRV) were dispatched on lights and sirens within seconds of the call being answered. Our Emergency Medical Dispatcher advised the caller to lay the patient flat on their back and carefully move their head to allow their airway to open properly.

A Paramedic Senior Clinical Advisor assisted with the call and while he was carrying out a further assessment, the patient woke up and had slurred and confused speech with his breathing still an immediate concern.

The RRV arrived on scene after four minutes followed by the ambulance two minutes later. The patient was assessed and was also found to be cold, confused and in a vulnerable state. His condition was monitored and he was taken to hospital for assessment.

While gardening at his home in Wakefield, a 47-year-old male feared he was having an angina attack and his wife called 999. He felt unwell and was pale and clammy.

As there were no apparent life-threatening symptoms, our Emergency Medical Dispatcher had more time to find out about the patient’s condition. He was coded Category 2 with a target response time of 18 minutes for the arrival of an ambulance capable of transporting the patient as their condition would be likely to require assessment and treatment at hospital.

When the ambulance arrived, the patient was starting to feel a little better with the chest pain easing. Our clinicians carried out some further investigations and he was monitored before being taken to hospital for further tests.

A 36-year-old man was working on a roof in Rotherham when he fell over 20ft and landed on concrete paving. His colleague called 999 and spoke to an Emergency Medical Dispatcher who established that the patient was breathing normally but was confused and agitated. He was also bleeding from an injury to the back of his head and from his ear.

The call was coded Category 2 with a target response time of 18 minutes. A Clinical Supervisor was also dispatched and the call was monitored by the Yorkshire Air Ambulance, a Paramedic Senior Clinical Advisor, Major Trauma Co-ordinator and Emergency Operations Centre Bronze Commander to ensure the patient received the most appropriate care.

Once on scene, it was obvious that the patient had suffered a serious head injury so the Yorkshire Air Ambulance was deployed. The doctor on board believed the patient had suffered a brain injury so carried out a procedure to put him to sleep and take over his breathing. Without this, the patient’s agitation would have made it too dangerous for transportation by air, yet the severity of his injury and distance to the nearest Major Trauma Centre made the helicopter the ideal form of transport.

On arrival at hospital, a scan confirmed internal bleeding around the brain and after a prolonged period in hospital and three operations, he made a full recovery.

A 42-year-old Thirsk man with mental health problems was in distress and considering suicide.

He had felt under strain since his death of his father and his mother’s recent cancer diagnosis. He had suffered with depression and severe anxiety in the past and had received support from his Community Mental Health Team after expressing suicidal feelings to his GP. However, he had lost their contact number so called 999 for help.

He first spoke to an Emergency Medical Dispatcher who coded his call Category 3 and referred him to one of our Mental Health Nurses in the Emergency Operations Centre. The nurse called the patient and they had a frank discussion about his feelings; he was offered advice and given coping mechanisms.

This reduced the patient’s levels of distress and he was deemed to be at low risk of harming himself at that time. He was then referred to the Community Mental Health Team who contacted the patient later that evening.

Although the patient would have been able to access mental health services if he had been admitted to hospital, there may have been a long wait. By having specialists to speak to the patient at his time of need and then providing a referral to community services, it avoided an anxious and unnecessary trip to hospital and freed up an ambulance to deal with another emergency.

A 25-year-old Sheffield woman tripped on some stairs and fell awkwardly on her out-stretched right hand. Immediately her arm was very painful and her wrist became swollen. She was alone and unsure what to do so she called 999.

She spoke to an Emergency Medical Dispatcher who, after making sure the patient was breathing and didn’t need any immediate interventions, obtained further information and coded the incident as a Category 3 meaning a target response time of 120 minutes for an ambulance capable of transporting the patient to hospital.

At around the same time on the opposite side of Sheffield, a serious multiple vehicle road traffic collision occurred which needed six ambulance resources. Due to the reduction in ambulance vehicles as well as higher priority calls coming in, a Paramedic Senior Clinical Advisor contacted the patient again to further assess her injuries.

It appeared the patient had suffered a muscular-skeletal injury to her wrist and would need an X-ray so, after being advised on pain relief, she was asked if she had a friend or relative who could take her to hospital.

Her boyfriend took her to the local minor injuries unit which meant the earmarked ambulance resource was free to deal with an alternative incident.

Advice for Pensioner with Urine Infection

A 68-year-old woman called 999 after suffering a sudden onset of chills and shivering at her home in York.

She spoke to an Emergency Medical Dispatcher who, after making sure the patient was breathing and didn’t need any immediate interventions, obtained further information which identified that she had no life-threatening or time-critical signs or symptoms. The call was coded Category 4 with a response of 180 minutes. She was informed that she would be called back by a nurse or paramedic within a set time, and given advice on what to do if her condition worsened.

A short time later she was contacted by a Paramedic Senior Clinical Advisor who carried out a more in-depth assessment which identified difficulty passing urine. Combined with the initial complaint of chills and shivering, the clinician suspected the patient had a urine infection and was advised to contact her GP.

She was reassured that her condition was not serious, given self-care advice to control any pain or high temperature and advised on symptoms to look out for which may indicate a deterioration in her condition.

Self-care Advice for Man with Cold

A 28-year-old male from Goole had been suffering with a cold for two days. He had a blocked nose and sinus pain as well as a reduced appetite and was feeling generally weak and unwell.

The man decided to call 999 and spoke to an Emergency Medical Dispatcher (EMD) who, after making sure the patient was breathing and didn’t any immediate interventions, confirmed the patient’s exact location before asking a series of questions about their current condition and symptoms.

As the patient was displaying only minor, non-acute symptoms, the computer-based system used to prioritise incoming emergency calls indicated that an ambulance level response was not required for the patient.

The caller was passed directly to NHS 111 where he received self-care advice for his symptoms. 111 is the NHS non-emergency number and would have been the appropriate number for this patient to call for advice about his symptoms.

Calling 999 was inappropriate in this instance but we have processes in place to direct such calls accordingly.