Help us mark the 72nd anniversary of the NHS 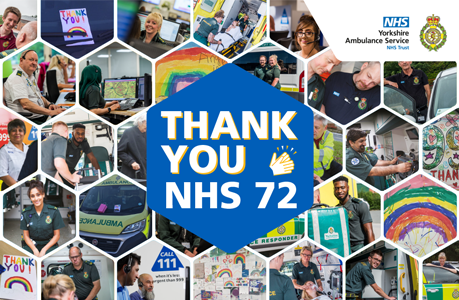 As the NHS reaches its 72nd anniversary on Sunday 5 July, this will undoubtedly be a time of reflection following the most challenging four months in NHS history.

Yorkshire Ambulance Service NHS Trust (YAS) couldn’t have coped without the unwavering commitment and dedication of its staff and volunteers who continue to respond to the COVID-19 pandemic.

Our work has been boosted by the love, appreciation and support shown by communities across Yorkshire so the biggest, loudest and final ‘clap for carers and key workers’ on Sunday 5 July at 5pm will be a chance for us to say ‘thank you’ to everyone who has helped us to respond to this global crisis.

While life is slowly beginning to return to normal for many, 28 selfless ambulance service staff working on the frontline in the fight against COVID-19, continue to live away from high-risk loved ones in a bid to keep them safe. They are living in hotel accommodation to protect their family members who face additional health risks.

Rod Barnes, Chief Executive of YAS, said: “This NHS anniversary provides us with an opportunity to thank our staff, volunteers and communities across Yorkshire for their support over the last four difficult months, and remember and reflect on the lives of those we have lost to this devastating virus.

“I would also like to acknowledge those staff who have made, and continue to make, huge sacrifices by living away from their family home to protect loved ones who are at risk. I know how challenging this year has been for our staff, but the fact that many still cannot return to their loved ones at the end of their shift makes it all the more difficult and I am humbled by their loyalty and dedication.”

On the evening of Saturday 4 July, as part of the national initiative, everyone is being asked to put a light in their windows in remembrance of those we have lost during the pandemic. This could be a candle, a lamp or a torch. Public buildings including the historic city walls of York, Wakefield Town Hall clock tower and Harrogate’s Nightingale Hospital will also be lit up in NHS blue.

To mark the anniversary, we will be sharing the stories of the sacrifices our staff are making by isolating away from their family members so they can continue to help patients across Yorkshire.  In addition to the provision of accommodation funded by the NHS, the Yorkshire Ambulance Service Charity is supporting colleagues by providing care packages and support with laundry and cleaning materials as many of the hotels are still offering a basic service.

Colin opted to move out of his home in Leeds on 7 April to isolate from his partner Louise who had to shield due to various respiratory-related health issues.

“At the very start of the pandemic I had started to shield from my partner as much as I could within our home environment but as the situation developed I decided the only way to keep her 100% safe would be to move into a hotel,” said Colin, who initially lived at a hotel in Wakefield before transferring to a hotel in Leeds to be closer to work.

“It was tough the day I packed my bags and said goodbye to Louise and my step-daughter Charlotte because no-one really knew what was going to happen and I didn’t know how long I would need to be away for,” he said.

Initially Colin had to source his own meals so it was a case of grabbing a takeaway, eating at one of the hospital sites or buying a snack from the local supermarket but when the hotel kitchen reopened, he was able to order his meals which were left outside his room.

“My working pattern is four days on, four days off and I have seen my partner once a week while social distancing in the garden. It’s been hard for her because she hasn’t been able to leave the house as she has been shielding and the fact that I have had to move out has made that situation more difficult for her but my priority has been to keep her safe.”

For the last three years, Colin has worked on one of the palliative care ambulances, transporting patients to and from their homes to local hospitals and hospices.

He said: “There has been no room for complacency; we’ve had to treat every patient as if they had COVID-19 and take the necessary precautions. The most difficult part has definitely been separating families due to the restrictions on visitors at hospitals and hospices; that definitely gets to you sometimes.”

Colin hopes it won’t be long until he’s able to return to the family home.

He added: “I do think the situation is improving but I don’t think we are out of the woods yet and I will stay away for as long as necessary to keep my partner safe.”

As a student nurse who also works as a Health Advisor for NHS 111 in Wakefield, Kabir knew leaving his family home was the best option when the pandemic struck.

He wanted to protect his parents, who both have health issues, and his 14-year-old sister so he moved to a hotel in late March and he has been there ever since.

“My family really didn’t want me to move out but I knew I wanted to help by continuing to work and this was the only way I could ensure I wasn’t putting them at risk,” said Kabir, whose family home is in Batley.

During the pandemic, not only has Kabir been doing long shifts answering NHS 111 calls, he has also been working shifts at hospitals across the North of England as a healthcare assistant, contributing towards his learning as a second year student nurse.

“Working in NHS 111 was really challenging with the huge volume of calls and there was no let-up for weeks; it was just constant,” recalled Kabir. “I also got to see the other side while working on COVID-19 wards which was also difficult but the experience I have gained has been invaluable and I can proudly say I played my part.”

For Kabir, the hardest part of isolating away from his family was the fact that he spent his first ever Ramadan and Eid away from them.

He said: “Ramadan is a time for coming together and it’s the one time of year that we get to spend real quality time with one another so it was a very different experience for me this year; but the soft pillow of my faith has helped me through.”

When the COVID-19 pandemic began, Emergency Medical Technician Lynn Leach knew it wasn’t an option to stay in the two-bedroomed home she shared with her husband in Patrington, East Yorkshire.

Not only did she want to protect her husband, who has diabetes and asthma, but her parents were also living with them at the time and have multiple health concerns.

“Straightaway I knew I couldn’t stay at home and go to work without putting them all at potentially lethal risk and there was no way I would have done that,” said Lynn, who is based at Withernsea Ambulance Station.

Lynn initially lived with a colleague before moving to a hotel in Hull where she stayed for nine weeks.

She said: “When I took the decision to move out on 22 March for the foreseeable future, it was heart-breaking. When I left, I had to stop the car after a mile because I couldn’t see for crying.

“I’ve had good days and bad days. When I was working there was some semblance of normality because you still had your routine, but days off were difficult because you were absolutely on your own and it felt like a lifetime.

“But my colleagues have been amazing; I have really felt the camaraderie. We have all come together to look after each other, everyone has been so supportive.”

When Lynn’s parents found somewhere to live, and her husband had the go-ahead to return to his job at Tesco, she decided the time was right to move back home and did so on 2 June.

“The situation in this area has more or less returned to normal so the decision was fairly easy to make,” said Lynn. “Once my parents moved out, my husband and I had the space to live together safely and I’m so happy to be home; it’s been amazing!

“God forbid, but if there was a second wave, I would do it all over again in a heartbeat.”

Hazardous Area Response Team Paramedic Darren Thorpe felt he had no choice but to isolate away from his wife who suffers from a rare form of severe asthma when the coronavirus outbreak started.

“There were a couple of instances before Christmas when my wife was admitted into hospital for a week at a time due to her brittle asthma,” said Darren, who lives in a village between Wakefield and Barnsley. “We both feared that she wouldn’t be strong enough to survive if she contracted COVID-19 so I knew moving out of the family home was the right decision, even though it was a tough decision to make.”

It also meant that Darren had to move away from his six children, aged between eight and 19.

“It’s been really difficult, especially at first when I was dropping off shopping and prescriptions in the porch and only able to wave at them through the window but we have all had to adapt,” said Darren, who has been living at a hotel in Wakefield.

As a member of the Hazardous Area Response Team which has been the focus of television’s 999 Rescue Squad, he has been sent thoughtful gifts by the programme’s production team.

“They have sent me books, biscuits, games and even a glove puppet so I had some conversation! It’s been entertaining and really kind of them to think of me when it’s not been an easy experience for anyone. I have been lucky to have a lot of support, particularly from my colleagues and manager.

“I’m desperate to go home but I just don’t know when the safe time will be at the moment.”