Team of heroes save mum-of-seven on cliff top walk 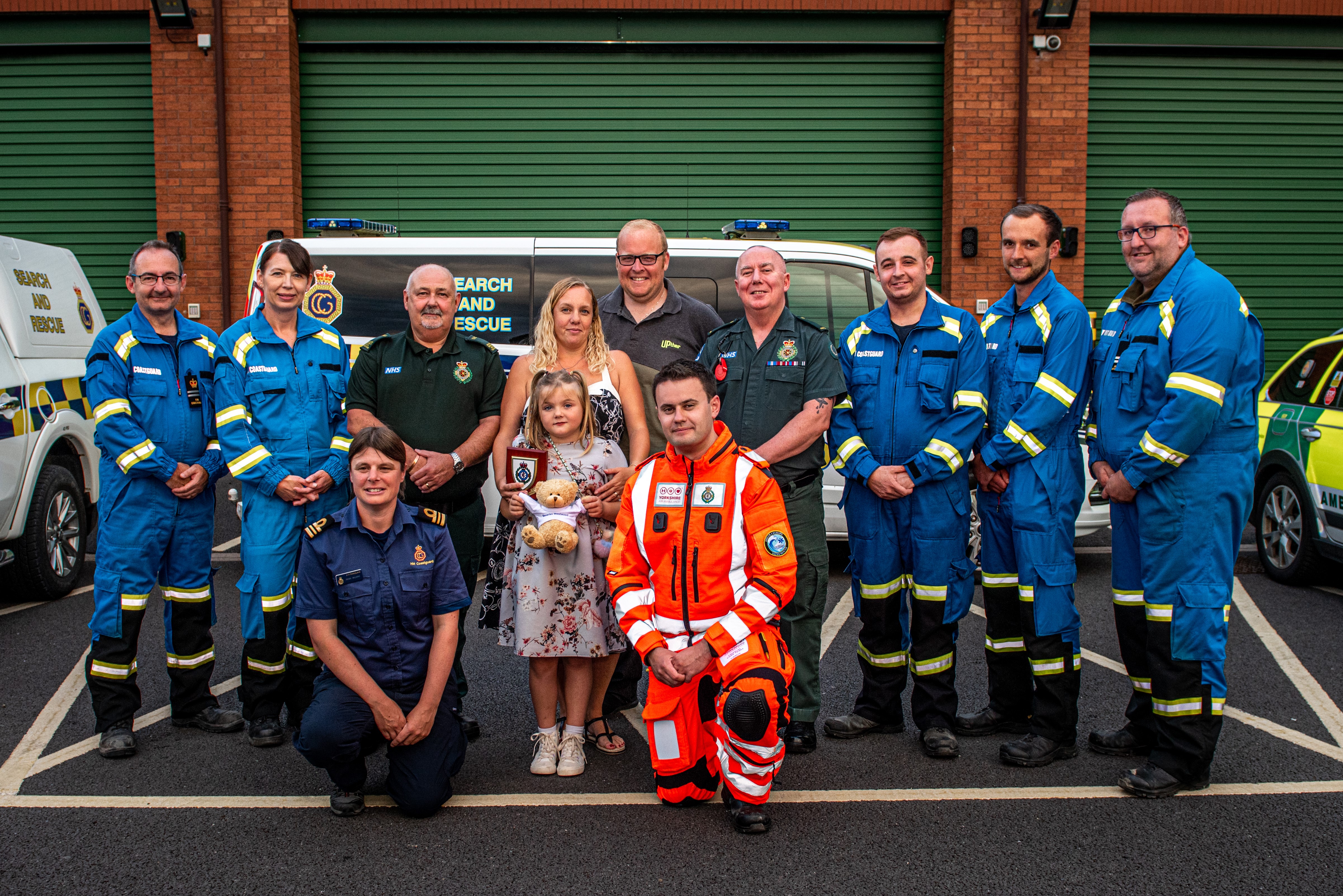 Donna Bates with the team who saved her life

Mum-of-seven Donna Bates feared the worst when she fell ill during a cliff top walk at a secluded East Coast beauty spot.

Thirty-nine-year-old Donna had been on an eight-mile walk along Flamborough cliff top with two of her children when she felt short of breath and a tightness in her chest.

“I knew it was serious and yet I felt a strange sense of calm. I really didn’t think I would still be alive by the time help arrived as there was no-one about so I said goodbye to the children I had with me and asked them to tell my other children how much I loved them all,” recalled Donna, who lives in Bubwith, near York, but was staying at her caravan at Haven Thornwick Bay Holiday Park, near Bridlington.

Luckily a couple walked around the headland and stopped to ask if Donna was okay.

The woman called 999 and seconds later Donna collapsed in cardiac arrest. That is when the man - who was a first-aider - recognised that he needed to start CPR. Their identity is still a mystery and Donna would love to track them down to say thank-you.

Within minutes a six-strong coastguard team were on scene, followed by paramedic Steve Johnson, an ambulance crew and the Yorkshire Air Ambulance who carried out advanced treatment. She was airlifted to Hull Royal Infirmary and admitted to the Intensive Care Unit in an induced coma. She regained consciousness a little after 24 hours and was discharged three days later.

Steve, who is based at Bridlington Ambulance Station, said: “This incident demonstrates the importance of CPR being started as soon as possible. Having the opportunity to be involved in teamwork with the coastguard, an ambulance crew and air ambulance was an honour… professional and caring from the start. There is no greater feeling than being part of a team and saving someone’s life, knowing that Donna gets to hold her children again.”

Donna, who is married to John, a professional photographer, suffered a set-back after a few days when she was re-admitted to hospital with a blood clot on her lung, but she is now on the road to recovery.

“I feel very lucky," said Donna, whose children are aged between seven and 21. “The right people were in the right place at the right time. To think I was in a remote location with no-one around and then out of nowhere a first aider appeared who was able to start CPR and call 999. I still haven’t managed to track them down, all I know is that they were called Simon and Carol and they were heading to Bempton; I’d love to meet them one day to say thank-you.

“They were followed by an incredible team of professionals who saved my life. Without all their efforts I wouldn’t be here and my seven children would have lost their mum, it’s as simple as that.

“I would urge anyone who doesn’t know CPR to learn, you just never know when you might need to use it.”

Donna was reunited with her life-savers from Yorkshire Ambulance Service, Yorkshire Air Ambulance and HM Coastguard when they got together at Bridlington Ambulance Station in August, just two months after the incident, to talk through what had happened that day in June 2022.

Fran Wilkins, Senior Coastal Operations Officer with HM Coastguard, explained that incident was the first time the Yorkshire and Lincolnshire team had deployed their defibrillator since the kit was introduced on all coastguard rescue vehicles just three weeks earlier.

Fran said: “It helped to give our staff on the ground the confidence that they were able to give the best care to Donna, and although the defibrillator didn’t need to shock her, it was able to guide what care they were giving so it was a really useful addition to the whole scenario. We don’t often get to hear about the outcome so it was great to be given the opportunity to meet Donna and hear how well she is doing.”

Sam Berridge, Paramedic with the Yorkshire Air Ambulance, said: “CPR is vital. People can be quite scared to do CPR but essentially if someone stops breathing and their heart stops beating, without CPR there is no chance of recovery. The fact two people were walking past who were trained and willing was brilliant because it would have been a very different outcome if they hadn’t been there.”